Thailand and Japan were among the 15 countries represented at “ONE: Warriors of Light.” It was the second ONE Championship event in 2019 held in Thailand.

While Nong-o was one of the six hometown fighters at “ONE: Warriors of Light,” Suzuki was one of the four representatives of Japan. Algeria, Australia, Cambodia, China, Chinese Taipei, Cyprus, the Netherlands, New Zealand, Pakistan, Papua New Guinea, the Philippines, Portugal and the United States were also represented.

Training out of Evolve MMA, Nong-o made his ONE Super Series debut on April 20, 2018 at “ONE: Heroes of Honor” at the SM Mall of Asia Arena, he defeated Fabio Pinca, 34, France. After defeating Mehdi “Diamond Heart” Zatout, 35, of France at “ONE: Kingdom of Heroes” at the Impact Arena on October 6, 2018, Nong-o became the inaugural ONE Bantamweight Muay Thai World Champion by defeating Han Zi Hao, 23, of China at “ONE: Clash of Legends” at the Impact Arena on February 16, 2019.

Elias Dolaptsis served as the referee of the title bout between Nong-o and Suzuki. The judges were Jonathan Lai and Ian Cartwright of Canada and Esthton Thomas of Malaysia.

After five three-minute rounds, the title bout was left in the hands of the judges. In the end, Dolaptsis raised the hand of Nong-o, who was declared the winner via unanimous decision.

“ONE: Warriors of Light” Co-Main Event

Petchdam Petchyindee Academy, 20, of Thailand and Elias “The Sniper” Mahmoudi, 21, of Algeria competed for the inaugural ONE Flyweight Kickboxing World Championship in the co-main event. The Thai contender won via technical decision after an accidental groin attack in the fourth round.

The official open workout for “ONE: Warriors of Light” took place in Bangkok on April 25, 2019. It featured Nong–O and Petchdam along with their fellow Thai ONE Championship athletes “The Iron Man” Rodtang Jitmuangnon, 21, Singtongnoi Por Telakun, 38, Superlek Kiatmoo9, 23, and Pongsiri “The Smiling Assassin” Mitsatit, 22.

Check the complete results for “ONE: Warriors of Light” on Conan Daily. Watch the recap here: 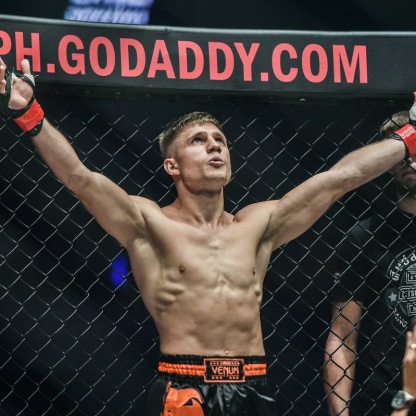 *More photos to be added after the bout

Indonesia and India were among the 16 countries represented at “ONE: For Honor.” It was the second ONE Championship event in 2019 that took place in Indonesia.

Featuring 10 mixed martial arts matches and four ONE Super Series contests, which are four Muay Thai bouts, “ONE: For Honor” took place at the Istora Senayan in Jakarta, Indonesia on May 4, 2019. The fifth bout of the evening was between Kenta Yamada, 31, of Japan and Deividas “The Savage Sitsongpeenong” Danyla, 27, of Lithuania.

Yamada was one of the four fighters who represented Japan at “ONE: For Honor” while Danyla solely represented Lithuania. Australia, Cambodia, China, England, India, Indonesia, Kyrgyzstan, Malaysia, Russia, Scotland, South Korea, Thailand, the United States and Vietnam were also represented.

Danyla was 10 years old when he started his Muay Thai training. He went on to become an IMC Muay Thai World Champion.

Yamada started his boxing training when he was 16 years old and eventually switched to kickboxing. He made his professional kickboxing debut in 2005.

Training out of E.S.G., Yamada was a World Boxing Council Muay Thai Japan Champion. “ONE: For Honor” marked his second ONE Super Series contest.

Yamada and Danyla competed in a Muay Thai contest in the bantamweight division. Atsushi Onari served as the referee.

After three three-minute rounds, the Muay Thai match was left in the hands of the judges. In the end, Onari raised the hand of Yamada, who was declared the winner via split decision.

Winning at “ONE: For Honor” improved the professional Muay Thai record of Yamada to 58 wins, 24 losses and 6 draws. On the other hand, Danyla now has 47 wins and 12 losses.

“ONE: For Honor” Main Event

Check the official results for “ONE: For Honor” on Conan Daily.