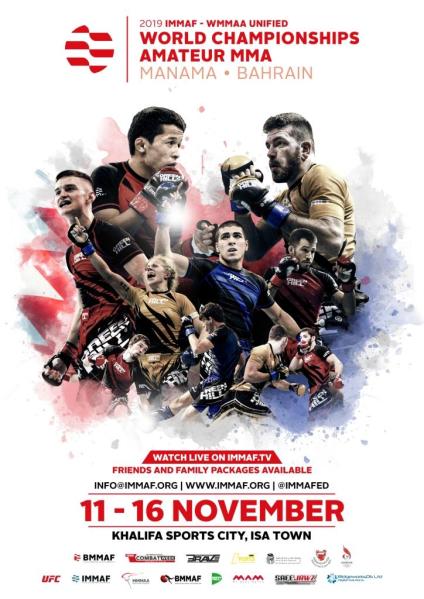 Hosted by the Bahrain Mixed Martial Arts Federation under the Bahrain Olympic Committee, the IMMAF’s 2019 Senior and Junior World Championship tournaments will take place at the Khalifa Sport City Stadium in Isa Town, Bahrain. Commencing on November 10, 2019 with the Tournament Draw and Opening Ceremony, the competitions will play out from November 11-14, 2019.

The finals will be on November 16, 2019. Prior to this, Bahraini MMA promotion Brave Combat Federation will host a professional MMA night on November 15, 2019 at the Khalifa Sport City Stadium.

Continued growth and global expansion by IMMAF through 2019 foretells record-breaking numbers at this year’s crown event. IMMAF president Kerrith Brown thanked His Highness Sheikh Khalid bin Hamad al Khalifa, the Youth and Sports Minister and national Olympic Committee President in Bahrain, for this work as “the driving force behind the development of MMA in the region.”

“We look forward to working again with the Bahrain MMA Federation and BRAVE to deliver another incomparable World Championship event for our athletes,” Brown stated. “Bahrain has exceeded expectations for two years running and I urge MMA amateurs to apply for the opportunity to participate in this extraordinary, world-class, sporting experience.”

MMA amateurs wishing to participate should contact their national IMMAF or WMMAA affiliated national federation for information. Meanwhile, here is a clip from IMMAF-WMMAA:

Santiago has fought around the world thanks to the Bahrain-based MMA promotion and his experience in the last few fights can be a difference maker at “Brave 25.” On April 19, 2019, he dethroned then reigning Brave CF Lightweight Champion Abdul-Kareem “Pride of Palestine” Al-Selwady, 23, at “Brave 23: Pride and Honor” at the Martyr Rashid Al-Ziyoud Hall Boxing Arena in Amman, Jordan.

As one of Jordanian MMA heroes, Al-Selwady is a young man who needs no introduction when it comes to MMA in the Middle East. One of the top stars of “Brave 23: Pride and Honor,” he came into the Brave CF arena to a chorus of cheers while his Brazilian challenger was welcomed with boos and menacing chants.

Unfazed, Santiago put on the performance of a lifetime as he avoided all the main strikes from the then-champion while connecting at will. Then out of nowhere, the Brazilian challenger threw the strike heard around the world and with a quick motion of his hips and the perfect placement of his elbow, he knocked out the Jordanian defending champion.

As Carlos Kremer announced Santiago’s name as the new Brave CF Lightweight World Champion, the Brazilian MMA star fell to his knees, crying in disbelief. He paid tribute to the crowd that was cheering against him seconds before.

“Jordan is my third home after Brazil and Bahrain,” Santiago said. “I want to thank you all for the support and I hope to fight here again but this time with this amazing and beautiful crowd behind me.”

It was the realization of a dream years in the making. From the poor upbringing in Salvador, Bahia, Brazil to the injury in his first title fight for Brave CF and from the bullying he suffered as a child and the need to be protected by his sister to the disagreements with his family, most of which did not want him to be a fighter, Santiago is now an MMA hero.

From Salvador, Santiago move to Curitiba, Paraná, Brazil where he went with a pocket full of dreams but empty of money. Hard work brought him to the riches of international fights and title belts.

Having gone through it all, Santiago did not forget where he came from. Since becoming a world champion, he has transformed into one of the biggest personalities of the fight game in Brazil and wherever he goes now in Curitiba, he is treated a VIP.

Aside from MMA, Santiago has developed a liking for public speaking. He is blossoming into one of the leaders of the talent-rich CM System Academy and is gearing up for a comeback to defend his title.

On August 30, 2019, Santiago and Silva will headline “Brave 25,” which will take place in the challenger’s hometown Belo Horizonte. The fight will not be exactly at home for the defending champion as will once again fight in enemy territory instead of his native Salvador or his adopted home of Curitiba.

Revered in Belo Horizonte as one of its best fighters, Silva will have his family, friends and fans, who will look to create a heavy and uncomfortable atmosphere for Santiago. But the defending champion is ready to prove himself in front of a hostile crowd again.

Meanwhile, here is Santiago’s post-fight interview when he was crowned as the Brave CF Lightweight World Champion:

“Brave 24: London” marks Brave Combat Federation’s first trip to London, England. The invite-only event is set to take mixed martial arts to the next level and could prove to become the start of a new era to the sport, according to International Mixed Martial Arts Federation president Kerrith Brown, a former Olympic athlete and bronze medalist in judo.

In charge of the biggest amateur MMA tournament in the world, Brown is a partner of Brave CF and the Kingdom of Bahrain, the host country for the IMMAF-World Mixed Martial Arts Association World Championships. He said, “‘Brave 24’ will be yet another milestone for Bahraini MMA and I wish the team every success for the event.”

According to Brown, Brave CF is doing the right thing by exposing MMA to a new audience. He believes the publicity that will be drawn from “Brave 24: London” could prove to become a seminal moment for the sport in the continental and world scales and hopes that the 2019 IMMAF-WMMAA World Championships in Bahrain in November 2019 also benefits from the already historical show.

“Publicity from the event should boost Brave’s profile over here and I hope also increase awareness about the amateur World Championships in Bahrain in November,”Brown stated. “I think a lot of benefits for the sport will come through connections made at the event and the opportunities that are developed from these. Looking back, it could prove a truly seminal event.”

“Brave 24: London” will take place at the Copper Box Arena, inside the Queen Elizabeth Olympic Park, in London, England on July 25, 2019. While the show is an invite-only, exclusive event, Brave CF fans will be able to watch it for free by signing up to BRAVE TV.

The live and free stream will not be available for fans from Brazil, the Middle East, the United States and the Philippines. They can check the official BRAVE TV website for listings.

Meanwhile, here is Brown delivering a speech in the Philippines in 2018:

His Highness Sheikh Khaled bin Hamad Al Khalifa, the founder and visionary of Brave Combat Federation, met with His Excellency Simon Martin, the British Ambassador to Bahrain days before “Brave 24: London.” They discussed the relationship between Bahrain and Great Britain and confirmed that the link between both countries has had a positive impact in various fields, including sports.

“Brave 24: London” is the first ever Brave CF event to take place in London, England. It will be held on July 25, 2019 at the Queen Elizabeth Olympic Park inside the Copper Box Arena.

As Brave CF gears up to make its London debut, H.H. Sheikh Khaled hailed the relationships between Bahrain and Great Britain and the mixed martial arts promotion’s role in cementing that positive rapport they share. He said, “We directed to the organizing of Brave Combat Federation in London on July 25th, 2019 as a step to cement the relationship among both countries.”

Such a step will give the groundbreaking event the opportunity to earn extra success, H.H. Sheikh Khaled explained. Martin, from his side, praised the efforts being exerted by the Brave CF founder to support the relations, welcoming the initiative to host “Brave 24: London.”

The British Ambassador to Bahrain noted that Brave CF’s popularity is on the rise. He added that the promotion has a growing number of followers worldwide.

“Brave 24: London” will be an invite-only event set to connect the highest level of influencers, businessmen and politicians to the fastest-growing sport in the world in the fastest-growing arena for MMA. Featuring eight MMA bouts, the historic show will be headlined by reigning Brave CF Featherweight World Champion Bubba “Bad Man” Jenkins, 31, of California, United States and  and his challenger Lucas “Mineiro” Martins, 30, of Brazil.

In the co-main event, Maciej “MagicMan” Gierzewski, 32, of Poland and Northern Ireland will make his Brave CF debut. He will compete in the lightweight division against undefeated fighter Cian “The Warrior” Cowley, 25, of Dublin, Ireland.